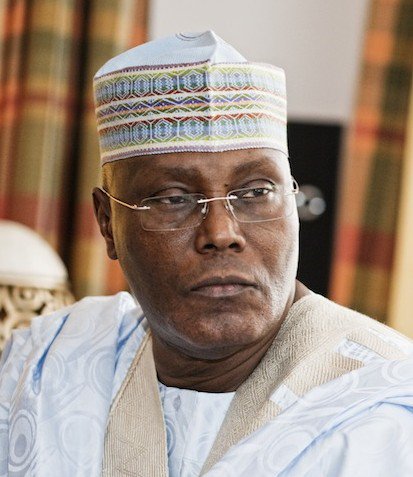 Last minute realignments Saturday paved way for the emergence of former Vice President Atiku Abubakar as the flag-bearer of the Peoples Democratic Party (PDP) for the 2023 presidential election.

Atiku, 75, who was the candidate of the party in 2019, polled 371 votes to emerge the winner of the keenly contested primary of the leading opposition party.

Thunderous ovation trailed the declaration of Atiku as the winner at 11:37pm on Saturday. Highpoint of the election was the presentation of the party’s flag to Atiku by the national chairman, Senator Iyorchia Ayu.

With his victory, the former vice president is set to slug it out with candidates of the 17 other political parties, including that of the ruling All Progressives Congress (APC) for the 2023 presidency. The ruling party had been dilly-dallying on its presidential primary to know who emerges as the PDP candidate.

Out of the 774 delegates selected from each of the country’s local government areas, only 767 were accredited for the primary held at the Velodrome of the National Stadium, Abuja. The total votes cast stood at 763, valid 751 and void 12 votes.

Daily Trust on Sunday gathered that intervention of party leaders and some northern elders shortly before the commencement of the election worked in favour of the former vice president.

At 8:34pm, Governor Aminu Waziri Tambuwal of Sokoto State stepped down for Atiku. Party sources said he withdrew from the race to support Atiku following the intervention of some elders who feared that should Wike pick the ticket, the ruling party would coast to victory in 2023.

Efforts by some PDP elders of northern extraction for consensus among Atiku, Saraki, Tambuwal and Bala Mohammed had failed before the commencement of the primary. The elders had met with the aspirants, but they insisted on participating in the exercise. The elders, however, resumed the push at the venue of the event.

Coming second to Atiku was Governor Nyesom Wike of River State, who polled 237 votes. Nwachukwu Anakwenze, an aspirant had pulled out of the race around 5pm to support Wike.

Daily Trust on Sunday reports that an ex-banker, Mohammed Hayatu-Deen, had pulled out of the race around 7am, saying he would continue to avail himself and his teeming supporters to ensure the victory of the party at all times.

In all, 11 aspirants slugged it out at the booth.

Our correspondents observed that aspirants from the South, except Udom Emmanuel, were all seated together, just as other contenders from the North were camped together.

Governors of Rivers and Benue states, Wike and Samuel Ortom respectively were seen having conversations shortly after Tambuwal announced his withdrawal from the race. Soon, another aspirant, Ayodele Fayose, also joined in.

Wike, who was cheerful before Tambuwal’s shocking announcement, frowned throughout the exercise.

The Rivers governor looked exhausted while ballot sorting was ongoing with Atiku’s name ringing in the air.

Multiple sources told this paper that before the delegates were mobilised to the venue, aspirants and their coordinators met them at their hotels, where dollars were reportedly shared to them.

It was gathered that while the former vice president doled out $10,000 to the delegates, the Rivers State governor was said to have given them between $15,000 and $20,000 per delegate. Other aspirants were also reported to have offered various sums of money ranging in anticipation of votes.

One of the coordinators of a leading aspirant told our reporter that the aspirants were given money to sway their votes.

There have been reports of widespread inducement since last week when the two major political parties, the PDP and the APC commenced the primaries to elect their candidates for various positions ahead of the 2023 general elections.

However, at the venue when our reporters approached them to speak on how the aspirants induced them, they declined comments.

Daily Trust on Sunday made efforts to speak with delegates from Kano, Kwara, Enugu, Akwa Ibom, Gombe and Kebbi states, but they all declined to speak with our reporters.

Worried by the report of the widespread bribery and inducement of delegates, operatives of the Economic and Financial Crimes Commission (EFCC) stormed the venue of the primary election.

The operatives, numbering about eight, arrived at the venue about 4.20pm.

Our correspondent observed that EFCC officials were stationed close to where the delegates were seated, apparently to monitor any distribution of cash among them.

A delegate who did not want his name in print, told Daily Trust on Sunday that, “It is because people have been talking about money for delegates in dollars that they are here? Do they think that the people would be so dumb to share money openly? If they are tired they will soon go.”

The operatives left the venue after staying for about two hours.

Scenes from the PDP presidential primary at the Moshood Abiola Stadium, Abuja, yesterday

Speaking before voting commenced, the PDP national chairman said that the party is now ready to rescue Nigeria.

Ayu lamented the deteriorating standard of living in Nigeria as a result of bad government of the APC.He said unemployment rate was on the rise, insecurity increasing and poverty hitting harder by the day.

Ayu said the ruling party rode on false promises that they are yet to deliver. He said Nigerians were tired and now calling on the PDP to return.

He assured that the party was ready to return to power at the national level and come to the rescue of the country, adding that he began to reposition the party for glory when he took over in December.

In his acceptance speech, Atiku described his emergence as historic for the country, adding that he would unify the country once he becomes president.

He promised to deal decisively with the country’s security and economic challenges once he becomes president.

“The APC came and wiped out all the gains made by the PDP. It is an opportunity to reverse mis-governance by the APC government”, he said.

Atiku urged all the aspirants to join hands with him in working for the victory of the party come 2023.

He urged aggrieved members to return to the party, adding they should explore available internal mechanisms in resolving their grievances rather than going to courts.

The position of the Southern and Middle Belt Leaders’ Forum (SMBLF) on the zoning of the Presidency to the South East has not changed, a member of the forum said yesterday.

The SMBLF comprising leaders of regional blocs like the Ohaneze Ndigbo, Afenifere, Middle Belt Forum (MBF), among others have demanded the zoning of the

presidency to the South with majority of members of the group expressing support for a South Easterner to emerge as the next President.

A member of the forum, Dr. Bitrus Pogu told our correspondent last night that the leaders of the forum would meet to take a position on the matter

He said, “Our position has not changed. Our position is not dependent on PDP. Peter Obi has moved to one platform. He is from the South East. We are going to meet and take some decisions.”

When contacted, spokesman of Afenifere, Comrade Jare Ajayi declined comment on the PDP primaries, saying the association would await the final outcome of the process before taking a position.

Tinubu: I look forward to squaring up with you

National Leader of the APC and frontline presidential aspirant, Asiwaju Bola Ahmed Tinubu has congratulated Atiku for emerging as the flag bearer of the PDP.

Tinubu, in a statement by his media office, commended Atiku for his patriotism and commitment to Nigeria’s progress.

He said expected the former vice president to be his worthy opponent, by the Grace of God and the support of APC delegates, in the coming 2023 President election.

The APC National Leader said Atiku’s victory didn’t come as a surprise to Nigerians because of his vast experience as a statesman and veteran of many presidential contests from 1993.

“I welcome the victory of Alhaji Atiku Abubakar as the candidate of the Peoples Democratic Party in the just concluded primary. I look forward to squaring up with him as a worthy opponent in the coming election. I have known the former Vice President as a formidable politician and a patriot who believes in the unity and progress of our dear country.

“As we move further into the election season, I charge the PDP presidential candidate and all political actors across Party lines that we should make this election season one that is devoid of bitterness, rancour and strife.

“We should make our campaigns peaceful and issue based. Election season should be a festival of ideas that will uplift our country and improve the living condition of all our people.

“Unfortunately for the PDP, its candidate will be burdened to explain why Nigerians should give it another opportunity, after squandering 16 years at the central government, without much to show,” he said.

Saraki, has congratulated Atiku on his emergence as the party’s presidential candidate.

Saraki, on his twitter handle, urged PDP members to work for the success of all the party’s candidates across the country.

He said, “I congratulate the winner of tonight’s #PDPPresidentialPrimary, His Excellency, our former Vice-President, Alhaji Atiku Abubakar, on his emergence as the Presidential flag-bearer of our party, the PDP.

“As we prepare for the future, I am proud that our message of #RealSolutions and deliberate leadership has resonated with millions of young Nigerians across the nation.

“Now, we must all rally around all our candidates across the nation to fix our economy, curb the insecurity, and put an end to the rising cost of living.”