Five Common Errors about Nigeria (I)

How Far Can Peter Obi Go?

Origin of the name Pele

Amusan: A new Star Is Born! 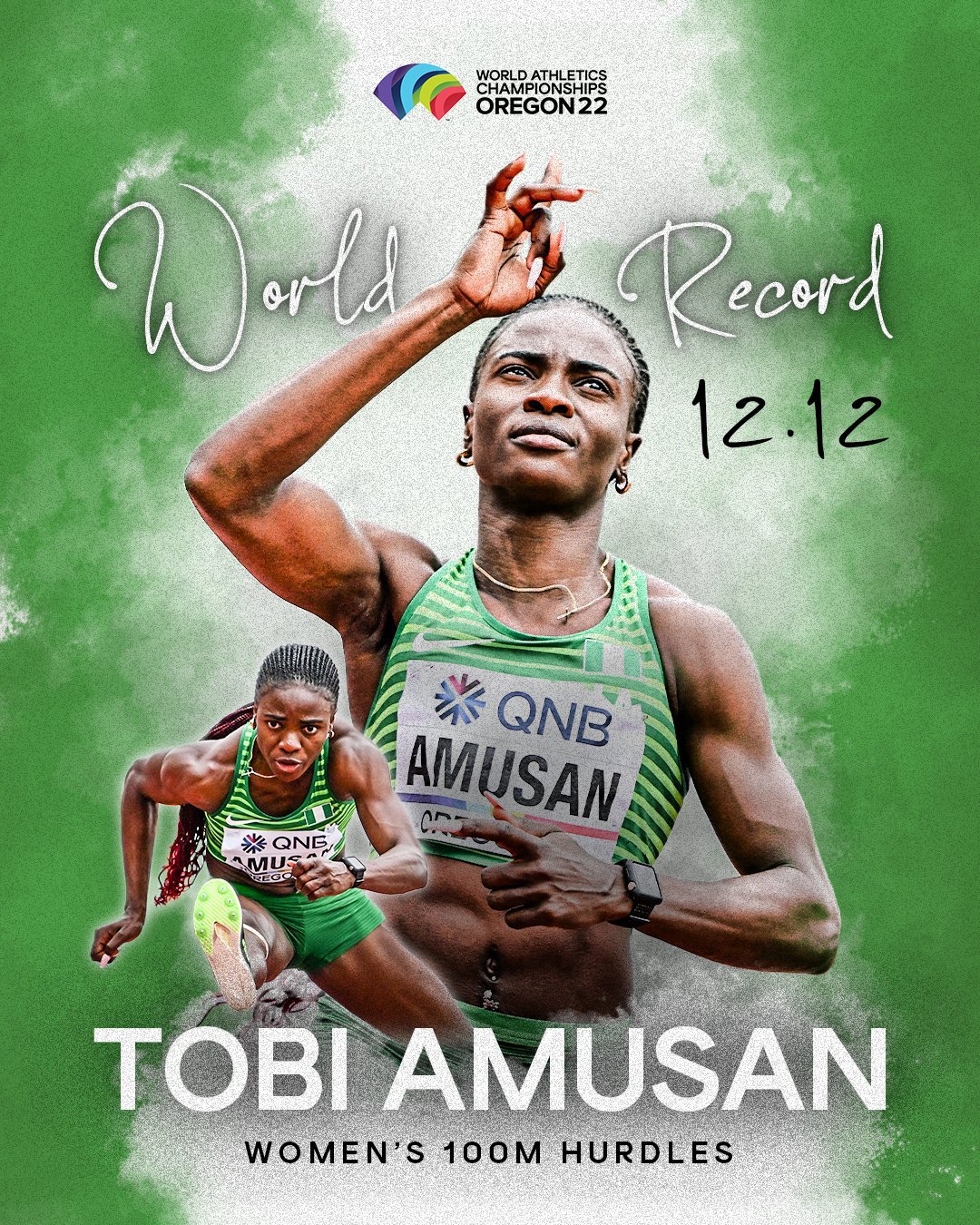 There was celebration amongst the stars. It had been long in coming.

For several years, a young Nigerian female athlete had been knocking on the door of success, to be let in.

It was always so close it became only a matter of time before she was going to make it, and to win at any one of the major events around the circuit of a track event that combines sprinting and scaling over hurdles for 100 metres. Hurdling is one of the most technical and challenging of races on the tracks.

Not too long ago, she mouthed her frustration to friends and thought briefly of accepting her fate, giving up the sport entirely, and thanking the Creator of the Universe for the relative success she had achieved in her life – fame, a sound grounding in education, a good income from running in the European circuits, and the opportunity to start a project to touch the lives of young girls in Ogun State of Nigeria where she comes from and to make her life a model they can emulate.

Earlier this year, in February 2022, she visited Nigeria and together with her mentor and greatest supporter (Omoba-Abiola Onasanya – a former national sprinter and US-trained athlete, coach and administrator) they funded the establishment of a sports program in Ijebu Ode that was to eventually become an annual clinic for the certification of coaches, to discover young talented athletes in selected secondary schools in Ogun State, to train those discovered locally, and to prepare the best of them for placement in American Colleges and Universities, a similar path she had trodden successfully on her own journey.

That done, and firmly set in her sights, she somehow dug deep into the spirit of determination, perseverance, even more hard work and a singlemindedness that was the last ingredient in the final finetuning of her running and jumping skills, inching ever closer to perfection in a long, lonely, and frustrating experience of always ending up in the periphery of success, and never getting there.

The heavens watched her put in all the work and effort essential for succeed, and as Eugene, Oregon, beckoned, ministered to her spirit to take it easy, relax this time and enjoy her running because as there was nothing more to do that she had not done. All she needed now is the wind of luck, staying fit and being healthy on the night of her events.

Last week, the heavens looked down favourably on her in a spiritual conspiracy that could only have come from the Throne of Grace. No one on earth had prepared for what was to happen, no one, least of all, Oluwatobilola, herself.

When the World Athletics Championship 100 metres hurdles event started, there was the blazing fire of determination and focus in her eyes, and the wind on her feet.

Many ‘bad bele’ analysts shamefacedly demanded an investigation into the make and length of the spike of her Adidas shoes, because they saw that she ‘flew’. Even the Black African/American legendary sprinter, Michael Johnson, a former world record holder in multiple events, shocked and bemused his many fans with his scepticism by claiming, without any justification, minutes after the races, that he doubted the integrity of the timing machines used. Pure balderdash. His bias and envy were obvious. What he also forgot was that the holder of the world record in the 100 metres hurdles event going to the championship, Ms Harrison, was in the same race, and Tobi had left her trailing in both of her races with a yawning margin.

Sceptics checked everything checkable to diminish two of the greatest sprinting events over hurdles the world has ever seen before that day, and found nothing but a slight tail wind over the limits, to deny her the pleasure of the ultimate achievement of breaking the world record twice in two successive races within minutes of each other! At last, her first record was ratified and her second time accepted, but not recorded as the new World record.

In the end, both decisions did not affect the reality of a race that was run to perfection every step of the 100 metres distance, ta perfect picture of a beautiful, young Nigerian female gliding over the hurdles with consummate ease and efficiency, effortlessly and flawlessly leaving the world in awe as history unfolds. This lady was to go on to earn a deserved place amongst mortals, a seat with the gods, and sporting immortality in history.

For those interested in the stars, l urge all to look up on any bright clear night and find the brightest star in the constellation. It is a newly-birthed star named Oluwatobiloba Amusan.

She is an ordinary girl from Ijebu Ode, an ordinary town in Ogun State, Nigeria. She went to an ordinary school in the town where her talent as a sports girl was discovered. She was initially a football player , but was converted to a runner when she was found to be running faster than the ball on the field.

There is something about Ijebu Ode and that entire environment that requires some scientific inquiry. Tobi was discovered as an athlete when she was in Our Lady of Apostle Secondary School in Ijebu Ode.

She tells the story of how her father angrily burnt her running shoes one day when he felt she was devoting more time to sport than to her academics.

Looking into their past, the school and the town have a rich but quiet history of producing some extra-ordinary athletes in sports.

That’s the environment that produced Falilat Ogunkoya, the Akinremi sisters, Ajoke Odumosu, Fatimo Mohammed, Anthony Josua, Isaac Adenuga and many other exceptional athletes. I am personally interested in pursuing that research.

Discovered by American College coaches Tobi Amusan simply followed in the footsteps of other athletes from Nigeria before her that had benefited from the training programmes offered by the University of Texas, El Paso, and went to the same university.

El paso has honed the talents of many Nigerian greats in athletics, providing them with athletics scholarships that gave them a grounding in education whilst making them exceptional athletes.

Last week, everything came together in two unforgettable races. With billions of eyes across the planet trained on her, she put up a performance that was too good to be true – a perfect race on a perfect night.

The biggest conversation around the world now may be: ‘where were you when Tobi Amusan, the Nigerian goddess of the track, broke a world record twice on the same night?’.