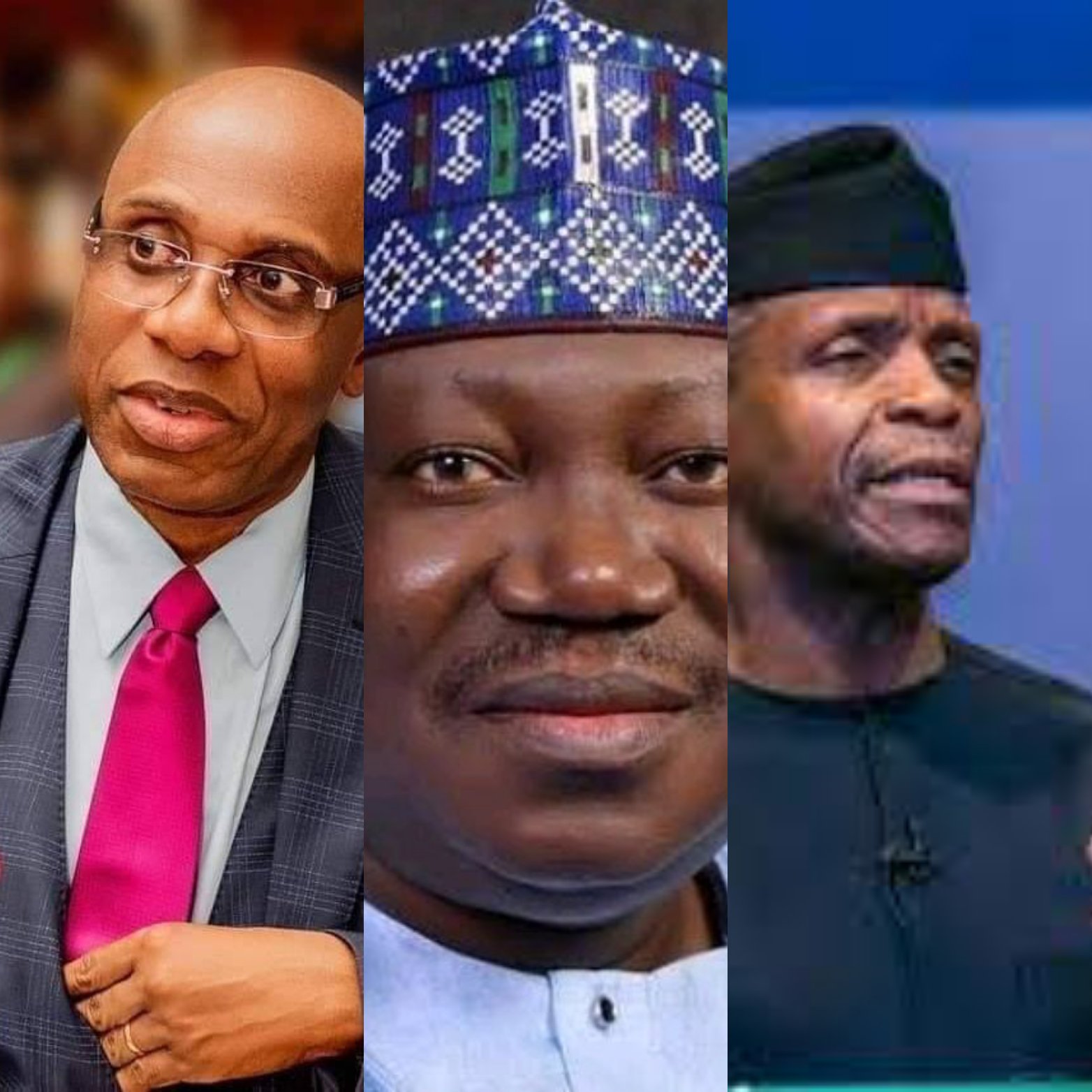 By Ismail Mudashir
And
Clement A. Oloyede

Cabal, First Family Members Failed To Secure Buhari’s Nod For Contenders
Osinbajo, Others’ Hope On President Dashed
It’s Morally Wrong To Mislead Aspirants – Prof Fage
Buhari Was Neutral – Presidency
Fresh fact has emerged on how assurances by people around President Muhammadu Buhari gave at least six presidential aspirants in the just concluded primary of the All Progressives Congress (APC) the confidence that they were the candidates to beat in the race.

Several efforts to trim down the 23 aspirants that picked the forms for the presidential primary of the ruling party at N100million failed like a pack of cards as they insisted on slugging it out at the ballot box.

After efforts by the party leaders at both the national and regional levels yielded no result, the 22 governors of the party devised a means to trim down the number. After meeting with the National Working Committee (NWC), they came up with a list of five aspirants to slug it at the convention ground, Eagle Square, Abuja.

However, immediately after the information filtered around that the governors had submitted the names of Vice President Yemi Osinbajo, the national leader of the party, Asiwaju Bola Ahmed Tinubu, the Ekiti State governor, Kayode Fayemi, former Minister of Transportation, Rotimi Amaechi and the Ebonyi State governor, Dave Umahi, to President Buhari, other aspirants kicked.

Daily Trust on Sunday reports that like previous efforts, the governors’ moves collapsed, hence the fierce battle by the aspirants at the poll.

The back story to the insistence by most of the aspirants, it was gathered, was the assurance many of them kept getting, even as they were forcing the ballot that they would be endorsed by the president.

All the aspirants who banked on the president’s purported endorsement were defeated. Tinubu, who was the first to make public his intention to contest the presidency, picked the party’s flag with 1,271 votes.

Hours before the primary, the national chairman of the party, Senator Abdullahi Adamu, named Lawan as the consensus candidate at a meeting of the members of the NWC) of the party. The purported endorsement was, however, rebuffed by northern governors and other pro-southern presidency stakeholders.

Daily Trust on Sunday had exclusively reported that Lawan was the candidate of the president’s nephew, Malam Mamman Daura, a former director-general of the Department of State Services (DSS), Lawal Daura and Senator Abdullahi Adamu.

Sources in the Villa said the trio had succeeded in securing the buy-in of the president, but the uproar that trailed the national chairman’s endorsement made him make a U-turn.

Daura, in July 2020, while featuring in a BBC Hausa Service interview, said there was no need for zoning the presidential ticket to any part of the country. His statement generated a heated debate in the polity, with many construing it to be the position of the president, a claim that was punctured by the presidency.

With the collapse of the consensus arrangement, Lawan came fourth with 152 votes.

Amaechi, a former minister of transportation, started his presidential campaign subtly through projects he sited in Daura, the president’s hometown in Katsina State.

Top on the list are the transportation university and the Kano-Maradi standard gauge railway line that passes through Daura, among others. To lay the foundation for his campaign, Amaechi was turbaned by the Emir of Daura, Alhaji Umar Faruq, as Dan Amanar Daura (the trusted son of Daura).

Through the president’s nephew and personal assistant, Sabiu Yusuf, popularly known as Tunde, Amaechi reached out to many people around the president. Tunde, after Mamman Daura, is the most influential person in Buhari’s kitchen cabinet, according to those familiar with the workings of the Villa.

Banking on the influence of Tunde, promoters of Amaechi, until the collapse of the consensus arrangement, believed he was the candidate to beat. Two influential figures had told this paper that Amaechi was the president’s candidate.

The former Rivers State governor came second at the primary after polling 316 votes.

Vice President Osinbajo rebuffed a series of moves to get him to step down for his godfather, Asiwaju Bola Ahmed Tinubu. There were reports that the South West leaders of the party appealed to him to step down for Tinubu 48 hours before the primary. He, however, insisted on trying his luck.

Star-boy, as he is fondly called by his supporters, came third with 235 votes. Until the conclusion of the primary, his supporters packaged him as the president’s anointed candidate, and they remained hopeful that Buhari would put a word for him, which never came.

When he discovered the people working for him were unable to turn things around in his favour, he pulled out of the race and supported Tinubu, a development that endeared him to Asiwaju’s supporters.

Following his support for the national leader during the convention, Akpabio has since picked the party’s ticket to represent Akwa Ibom North West at the Senate.

Like Akpabio, Amosun, a former governor of Ogun State, stepped down for the former Lagos State governor during the primary. His decision to support Tinubu shocked many as his relationship with him, according to APC chieftains in the South West, was not cordial.

Like the others, Amosun hoped for Buhari’s endorsement, banking on their personal relationship. Amosun, who represents the Ogun Central senatorial district at the National Assembly, has a very close tie with the president and his family.

Daily Trust on Sunday reports that the Buharis and Amosuns have a personal relationship built on trust and mutual respect over many years, thus the former governor sees himself as the president’s candidate.

The trio of former ministers Ogbonnaya Onu, Emeka Nwajiuba and Ikeobasi Mokelu, were said to have misread the president’s language. They were said to have banked on their closeness to the president to position themselves in the event that he would decide to support power shift to the South East to cool the tempers in the region.

The three South East politicians, therefore, saw themselves as the preferred candidates of the president. Some of them were also said to have gone to the race with the expectation that in the event that a northerner picked the ticket, they would be considered for a running mate.

At the end, however, the trio recorded abysmal performance during the primary. While Onu and Nwajiuba polled one vote each, Mokelu, a former minister during the military regime of the late General Sani Abacha, got no vote.

Professor Kamilu Sani Fage of the Bayero University, Kano (BUK), said it was more or less a political consideration for the president to give his blessings to everyone that informed him of his/her aspiration, but it would be morally wrong for members of his family or the presidency to ask different people to go into the contest with the phantom promise of supporting them.

“Politically and morally, it would be wrong for the president to come out and say he is not going to support you. But if someone has an ambition, the president may not give him a direct commitment and show that he is not an obstacle against his/her ambition. Where the problem lies is if it is true that the first family actually instigated and supported different aspirants and later found out that they had supported so many. That is wrong, politically and morally,” Fage said.

On what the position portends for the presidency and the country, the renowned political scientist said it depended on how the presidency could mend fences, adding, “After all, politics should not be a do or die affair.”

“Their focus is to work as a team to ensure that their party succeeds in the general elections. The outcome of everything depends on how they can mend fences and build a team together. But if they still nurse the grudge of defeat or opposition, that will not work well for the system and the party,” he said.

Comparing Buhari’s family’s role in politicking with previous families, especially that of Olusegun Obasanjo (the only one to complete two terms), Fage said the latter was like a patriarchal family because the former president more or less single-handedly ran it like a military system, but for Buhari’s family he said, “They started with the First Lady in the background when the president said there won’t be an Office of the First Lady. Over time, she became more active, and at a time, she was very vocal in the opposition of the position of the president.”

The special adviser to the president on media and publicity, Femi Adesina, said President Buhari was neutral during the presidential primary.

Adesina disclosed his view in an article titled, ‘Knock, knock! Who’s there?’ which he shared on his official Facebook page. According to him, Buhari, unlike former President Obasanjo, refused to impose his favourite on his party.

“It was human to have a favourite in such a situation, and the president did no wrong. But would you unduly favour the person? Would you throw your weight around, ride roughshod over the others and impose your favoured one on your political party and the nation? We have seen it before.

“Former President Obasanjo did it with Umaru Yar’adua. He did the same, though to a lesser extent, with Dr Goodluck Jonathan. Can Buhari do it and remain a democrat, fair and impartial? Knock, knock! Who’s there?

“That was the matter of interest in the week before the primary election. There were at least 23 aspirants. Who would the president give the nod? Could he remain neutral, non-aligned? At least, he had confessed he had someone in mind. Would he remain even-handed, detached, non-discriminatory?