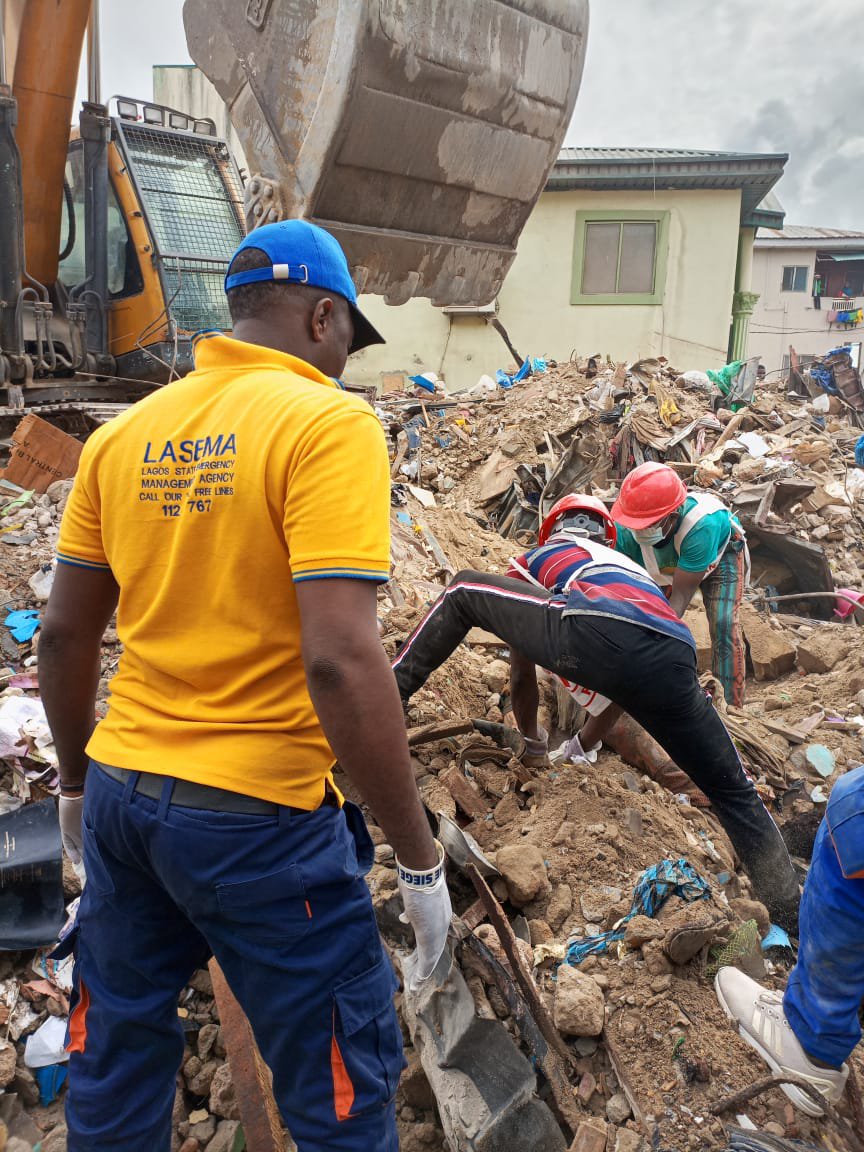 Ten persons comprising five men, four females and a four-year-old boy were yesterday confirmed dead and 24 others rescued from the three-storey building that collapsed in Lagos.

The building located at the popular Ibadan Street, Ebute Metta, a densely populated neighbourhood, caved in around 9:48pm on Sunday.

A bread seller, her adult foster son, a young man, his mother, an aged man with hearing impairment, a National Youth Service Corps (NYSC) member, Oluwakemi, an unnamed elderly woman and her child were recovered dead from underneath the rubble by emergency responders who worked overnight at the scene.

Two more bodies were pulled later from the rubble.

A lady, who died in the building, was said to have first come out before going back to fetch her phone, and was crushed by the collapsing structure.

It was gathered that seven of those rescued alive were children, while most of the 24 survivors sustained minor injuries.

A survivor, Goke Ogunbambi, said he was sleeping on the topmost floor when the building collapsed.

Ogunbambi, a civil engineer, had lived in the compound for a decade.

“I am a spinal injury patient. I was asleep around 9:30pm when I heard the noise, I imagined that the building was collapsing and I was naked. When we got to the ground, people came to rescue me. I was with my woman when it happened,” he said.

An inconsolable man, who lost his wife and son in the building, said he and his family were on about moving out, and were only waiting for the tiling work in the new place to be completed, when the building fell.

He said he was returning from the new house when he heard about the collapse.

According to witnesses, the building caved in while some of the occupants were observing their Salat prayers.

The Nation gathered that the structure had been defective for over a year and showed obvious signs of danger but the occupants ignored them.

It was alleged that the landlord’s son, Soji Dosunmu, who was in charge of the building, also issued quit notices to all tenants and moved out of the property to a rented apartment.

It was further said that the developer failed to carry out repairs on the property, as instructed by the owners.

However, while some of the tenants vacated the structure, others refused to leave especially as they were no longer paying rent.

Real estate agents, residents said, also brought some new tenants to the facility and collected money from them.

A woman, Omotola Gabriel, said it was common knowledge to most residents that the building would collapse anytime.

“I had just finished taking my dinner when the atmosphere of the neighbouring building went dark and by the time we looked towards the direction to find out why, we were told that the building had collapsed and we rushed to the scene only to find out that some occupants had been trapped,” she said.

A resident, Dr. Olarenwaju Ayade, described the incident as saddening.

Another resident, Bolaji Okuneye, faulted the Lagos State Building Control Agency (LABSCA) for not taking action beyond marking it for demolition.

President Muhammadu Buhari lamented the frequent occurrence of building collapse in the country, describing it as increasingly embarrassing.

He urged relevant state agencies to work with professionals to curb the menace.

He commiserated with the families of those affected by the Ebute Metta incident.

“The President notes that the frequency of building collapses in the country has become increasingly embarrassing, urging the relevant state authorities to work closely with professional bodies to put a halt to these unfortunate but preventable incidents,” spokesman Femi Adesina said yesterday in a statement.