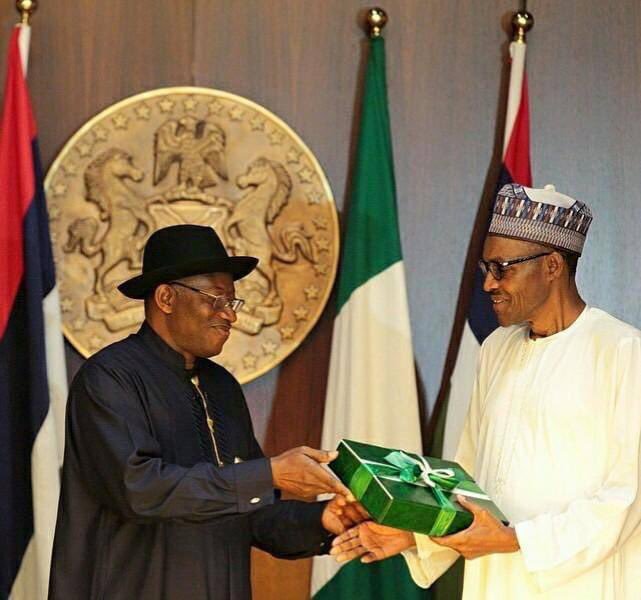 Two days after former President Goodluck Jonathan got a reprieve from a Federal High Court, removing the constitutional obstruction that now makes him eligible to contest 2023 presidency, President Muhammadu Buhari has distanced himself from any plot to draft Jonathan into the All Progressives Congress (APC) presidential race.

Indications have emerged that while few APC members, including a Northern governor, are behind the push to draft Jonathan into the ruling party’s presidential primary, a Presidency source late on Sunday, however, revealed that President Buhari has taken measures to distance himself from the plot.

The impeccable source in the Villa disclosed that instructions have consequently been given that there shall be no public release of photos of any meetings between the former President and the incumbent at this time as the President does not want such images to be used to confer any modicum of support to the plot to get Jonathan into the race.

According to the source, there are also concerns that the aides of the ex-President are “involved in actively keeping the plot alive in the media by releasing photos of his visits to the APC Chairman, Senator Abdullahi Adamu and Alhaji Mamman Daura, the President’s influential nephew, to insinuate that these two gentlemen are in support of the plot.”

However, while speculative news reports have claimed the APC has granted Jonathan waiver to join the presidential race even though he is not known to have properly fulfilled membership requirements, there has not been any formal confirmation that he submitted the presidential nomination forms or whether he would be included in the screening expected to happen this week.

Meanwhile, the source added that the former president is not being precluded from visiting the Presidential Villa at this time in line with protocol, being a former President in good standing and due to his international assignments for which he has to regularly brief President Buhari.

Although President Buhari has not indicated who he is backing for the APC presidential primary, the Presidency source explained that “Jonathan is certainly not in the picture at all and the mentioning of his name has been invoking feelings of absurdity and ridicule in the Villa.”

The source recalled that “when during a public interview earlier this year, a journalist asked the president to use one word to describe the PDP, he instantly said ‘failure,’ how then would the same person who strongly feels that way would then be contemplating supporting the same PDP candidate he roundly defeated?”

It was also disclosed that neither the APC Chairman nor Daura are behind the plot to draft Jonathan, as it is being suggested. According to the source, “it’s only the aides of the ex-president that are going to town to create such an impression.”

The source further added: “All of these plots would be over in a matter of days as the APC presidential primaries are now irretrievably set and the President’s choice would be known.”

ALSO, former Secretary to the Federal Government, Chief Olu Falae, has attributed the plot to draft Jonathan into the race to the desperate attempt by some powerful forces to quickly return power to the North after his one term in 2027.

Falae, who faulted the moves while speaking with journalists in Akure, the Ondo state capital, yesterday, wondered how Jonathan that was booted out over incompetency and corruption, suddenly became a beautiful bride to the powerful forces from the North.

He, however, maintained that the country could only move forward if she embraces restructuring, noting that the present constitution of the country is faulty and should be replaced to move the country forward.

“There could never be peace in the country with this quasi-unitary Constitution, which is what some people want to hang on to because it suits them in a faulty arrangement, without doing the needful.

“The man you threw away from government, describing him an incompetent man, an idiot, an imbecile and there was no name they didn’t call him and you are calling him back to ask him to come back to rule.

“And there is only one reason for that. The only reason they are asking Goodluck to come back is that he will spend one term as President. They don’t want the presidency to be in the South for more than four years.

“They want it quickly back in the North. So they want to use Goodluck to achieve that objective against his own people. They don’t care what he does if he goes back this time around and is a ‘bigger thief’ this time, or if he is more incompetent this time, it does not bother them as long as they get back to power quickly. Are we on the same plane? Do we have the same objective?