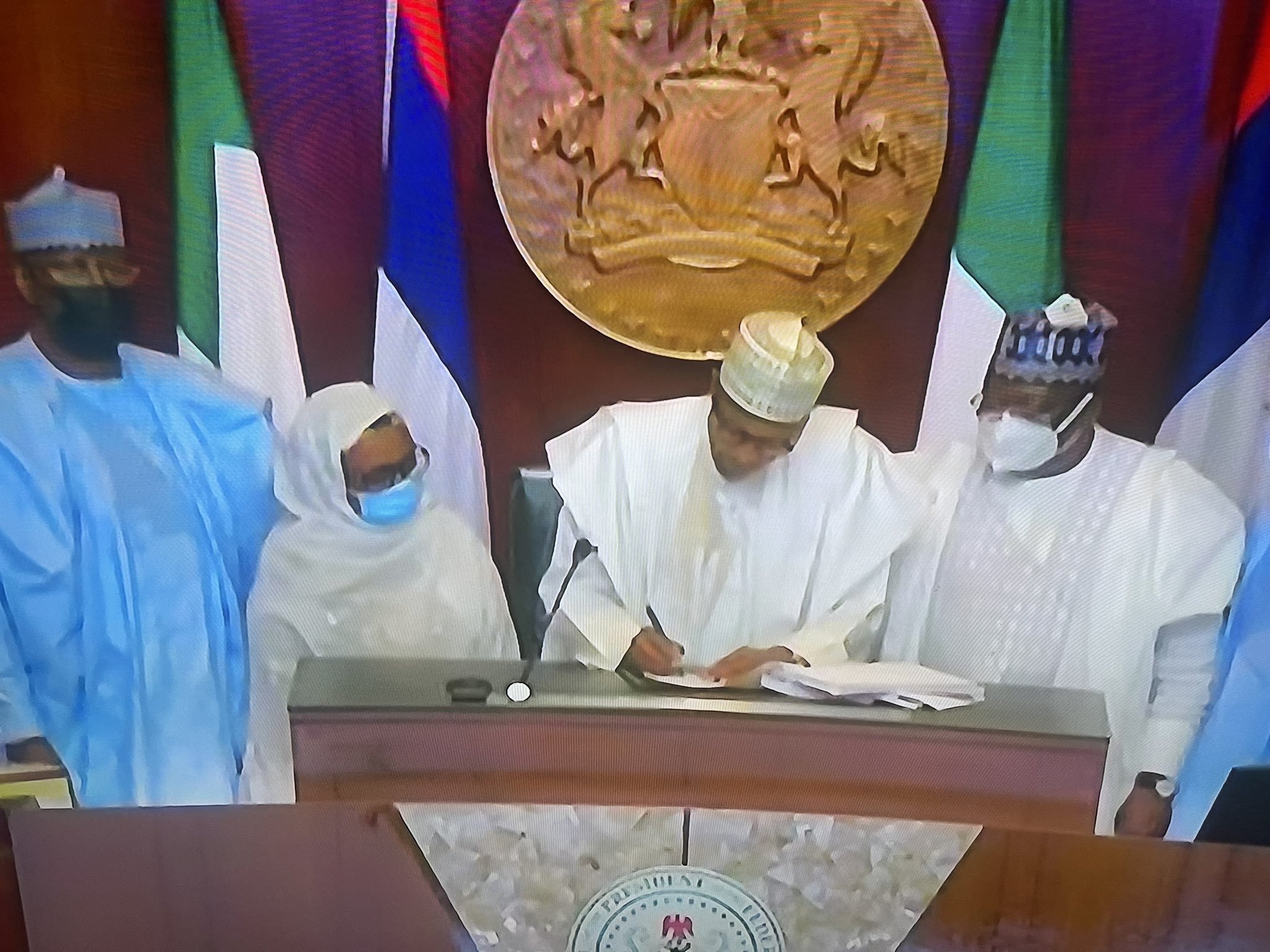 He said the new law should reduce disagreements and ambiguities in the electoral process, adding that he received inputs from various areas to ensure the law is rich.

The President last year withheld assent to an earlier version of the bill for reasons he expressed in his communication to the National Assembly.

He however signed the bill into an act after it was presented to him by his Senior Special Adviser on National Assembly Matters (Senate) Senator Babajide Omoworare.

The President also pointed out few issues in the new Act, to which he had proposed an amendments and appealed to the National Assembly to give the required attention to it.

The ceremony was witnessed by the Senate President, Ahmed Lawan, Speaker Femi Gbajabiamila, the Chairman of the Nigerian Governors’ Forum (NGF), Dr Kayode Fayemi, and some others

ADDRESS BY HIS EXCELLENCY, PRESIDENT MUHAMMADU BUHARI, PRESIDENT FEDERAL REPUBLIC OF NIGERIA AT THE SIGNING OF ELECTORAL BILL 2022 INTO LAW

The Electoral Act (Amendment) Bill 2022, passed by the National Assembly forwarded for Presidential Assent, via a letter dated 31st January, 2022. In line with established tradition, I received inputs from relevant ministries, departments and agencies of government after careful and thorough reviews of the Bill and its implications to democratic processes in our country.

2. It is gratifying to note that the current Bill comes with a great deal of improvement from the previous Electoral Bill 2021. There are salient and praiseworthy provisions that could positively revolutionize elections in Nigeria through the introduction of new technological innovations. These innovations would guarantee the constitutional rights of citizens to vote and to do so effectively.

3. The Bill would also improve and engender clarity, effectiveness and transparency of the election process, as well as reduce to the barest minimum incidences of acrimony arising from dissatisfied candidates and political parties.

4. These commendable efforts are in line with our policy to bequeath posterity and landmark legal framework that paves the way for credible and sound electoral process that we would all be proud of.

5. Distinguished Senators and Honourable Members of the National Assembly, from the review it is my perspective that the substance of the Bill is both reformative and progressive. I am making this bold declaration because I foresee the great potentials of the Bill. Worthy of note include the democratic efficacy of the Bill with particular reference to sections 3, 9(2), 34, 41, 47, 84(9), (10) and (11) among others.

6. This however, cannot be said about one provision as contained in the proposed Bill, which provision constitutes fundamental defect, as it is in conflict with extant constitutional provisions.

9. The practical application of section 84(12) of the Electoral Bill, 2022 will, if assented to, by operation of law, subject serving political office holders to inhibitions and restrictions referred to under section 40 and 42 of the 1999 Constitution (as amended).

10. It is imperative to note that the only constitutional expectation placed on serving political office holders that qualify, by extension as public officers within the context of the constitution is resignation, withdrawal or retirement at least 30 days before the date of the election.

11. Hence, it will be stretching things beyond the constitutional limit to import extraneous restriction into the constitution on account of practical application of section 84(12) of the bill where political parties’ conventions and congresses were to hold earlier than 30 days to the election.

12. Arising from the foregoing, with particular regards to the benefits of the Bill, industry, time, resources and energy committed in its passage, I hereby assent to the Bill and request the Nationally Assembly to consider immediate amendments that will bring the Bill in tune with constitutionality by way of deleting section 84(12) accordingly.

Thank you may God bless our country.