We Have Recovered Over N30bn From Suspended AGF – EFCC Chairman 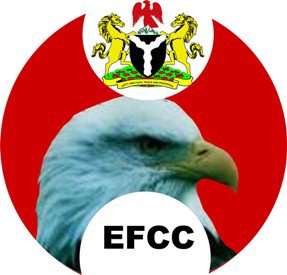 By
Muideen Olaniyi
The Chairman of the Economic and Financial Crimes Commission (EFCC), Abdulrasheed Bawa, has said the commission has recovered more than N30 billion from the suspended Accountant-General of the Federation, Idris Ahmed.
He said this Thursday while appearing on the Ministerial Briefing organised by the Presidential Communication Team at the Presidential Villa, Abuja.
The commission is currently prosecuting the suspended AGF over alleged N109 billion fraud.
The EFCC boss, who pointed out the achievements of the agency from January to December, 2022, gave other recoveries as N134,33,759,574.25, $121,769,076.30, £21,020.00, €156,925.00, ¥21,350.00, CFA300,000.00 among others.

Bawa, who further spoke on the operations so far under his watch, said the EFCC had not backed down on the N7.1 billion fraud case against former governor of Abia State and Chief Whip of the Senate, Senator Orji Uzor Kalu.
Senator Kalu had sought an Abuja Federal High Court’s order to bar the EFCC to retry him, arguing that a Supreme Court decision which ordered a retrial of the fraud case did not include him as a party in the retrial.
The court granted Kalu’s plea, ordering the anti-graft agency to exclude him from the retrial of a case for which he had been tried and convicted.
Reacting to a question during the briefing, Bawa said the former governor had not been discharged, nor acquitted, adding that the EFCC was still pursuing the matter against him.
He said: “My friend here asked about Senator Orji Uzor Kalu. The prosecution lasted 12 years or so and he was convicted by the court. He went to the Supreme Court and the court said yes because he was elevated to the Court of Appeal, it cannot come back to the lower court and that he should be retried in Lagos.
“So, we wanted to arraign him almost immediately in Lagos for the prosecution to start all over again and then he went to court, challenging that he has been discharged and acquitted and nobody discharged and acquitted him and we are still pursuing the matters in court here in Abuja. So the matter is still ongoing.”
Bawa, who also said over 3,615 convictions were recorded within the period, stated that the administration was serious about its anti-corruption programme.
He announced that following the nationwide auction of forfeited automobiles, it will be followed by the disposal of over 150 houses to interested buyers.
He assured that by the time the Special Control Unit against Money Laundering (SCMUL) becomes fully operational, it will be difficult for money to be laundered in the country.