Tinubu and Osinbajo: The true story of how they met 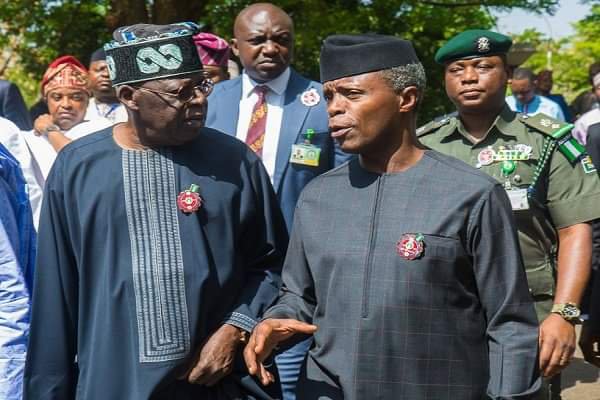 I never wanted to write this story but I was inspired to do so today, following Buba Galadima’s interview with the Punch on Monday. Buba struck a chord when he spoke about the issue of trust in the relationship between Bola Ahmed Tinubu and Vice President, Professor Yemi Osinbajo.

You think Osinbajo should have given up his presidential ambition for loyalty to Tinubu?, Buba was asked.

He replied: “If he doesn’t, can you now trust him? If you look at how Osinbajo came with Tinubu and he’s now contesting against Tinubu who brought him, how safe would you be to work with such a person?

“If the man who did all this to someone who made him commissioner, made him this, made him that and he is now fighting him. You will now want to fight for him now, what would be your status later in life with him?”.

Just like Buba, I feel strongly that Osinbajo has grossly violated the trust that ordinarily should exist between him and Tinubu.

Contrary to the stories in the social media, I was the one God used to bring Osinbajo into Tinubu’s circle in January 1999.

Tinubu had just won the election as governor of Lagos State and days after, we met on the 6th floor of Kresta Laurel at Maryland, which Otunba Gbenga Daniel donated for our use. On this day, Tinubu shared with us some of the ‘certain’ appointments he intended to make. Those who were at the meeting were Otunba Daniel, Dele Alake and I. Tinubu sat at the head of the table as he said he would make Rafiu Tinubu the Lagos State Head of Service. We argued over this and he justified the planned appointment by saying that Rafiu, who is now late, was a senior permanent secretary in the Lagos Civil Service.

I shot back and said: ” I have a better person for you”, my exact words. Tinubu was startled by my interjection.

“He is a Law Professor and the man who drafted our company’s MOU. He crafted it in a brilliant way that protected us from the founding partners. Without this, the other shareholders would have thrown us out”, I explained.

I also said Osinbajo had worked with Prince Bola Ajibola, who was the Attorney-General and Minister of Justice under President Babangida.

Dele and Otunba Daniel did not oppose my nomination, surprisingly. Tinubu also appeared eager to meet the “wonder lawyer” that I have just sold to him, to replace a man, who had served as the lawyer to the campaign.

“Go and bring him”, Tinubu said.

Before the meeting ended, Tinubu also settled on his nominee for Information Ministry. It was to be Dele Alake and I said I would return to my office to continue journalism.

After the meeting, I went to Osinbajo’s house in Ogudu to invite him to meet the new governor, Bola Tinubu. I remember entering the apartment from the kitchen. The wife was there when I delivered the message and left the house with him, later.

I have never published this story before and hereby want to apologise to my namesake Bayo Oriola, for blocking what should have rightly been his entitlement, going by the role he played during the campaign. I hope Oriola would have the heart to forgive me.

This event happened 23 years ago. Thus a few days ago, I asked Alake to fill the memory gap. Here is what he sent to me from the U.S.

“I remember that day very well. I had actually mentioned Jebby ( Osinbajo’s nickname) to Asiwaju before that meeting. He said we’ll see. You can ask Asiwaju himself. Which was why I didn’t object when you mentioned him at the meeting because it reinforced what I had told him.

“My mentioning Jebby’s name was solely because we were classmates in Igbobi college – same classroom, together with Tunde Fowler, Ade Ashekun, (the one he made ambassador to Canada) and Tunde Durosinmi Etti, former Commissioner under Ambode. Jebby and I were also attending the same church, Baptist Sheperd Hill Obanikoro, and his father’s house in Obanikoro not far from my dad’s house in Pedro road at the back of the church.

“After you mentioned his name that day , Asiwaju still asked Gbenga Daniel again and Gbenga also okayed him.

” Asiwaju knows all these. You were the one that mentioned him openly at the meeting while I had mentioned him a day or two before in private and Asiwaju again confirmed his name from Daniel.

“When Asiwaju told me he also asked about him from Daniel I then told him that Daniel, myself and yourself were contemporaries in UNILAG and he laughed that we were doing Akoka solidarity”.

Looking back now, did I regret what I did in January 1999. Yes, I would say I have some regret, especially since my action hurt Bayo Oriola. And my apology to Oriola once again. I could not have foreseen today’s turn of events between Tinubu and Osinbajo, who I nominated to be justice commissioner.