Tips to avoid vehicles impounded or auctioned in Lagos 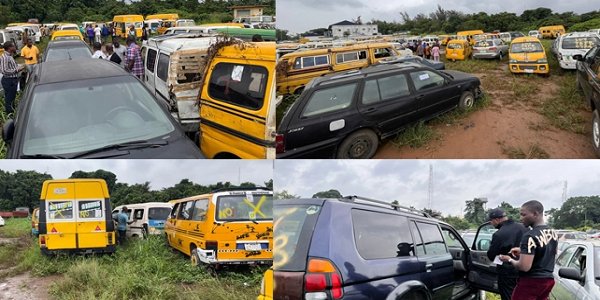 Driving is not for the weak-willed and ignorance of traffic laws is not an excuse.

Obeying traffic laws is a simple yet often overlooked action. When everyone is following the rules, the road is more organised and most importantly safer.

For example, the Lagos State Government during the week, auctioned 134 forfeited and abandoned vehicles at the Taskforce compound in Alausa, Ikeja.

Jubril Gawat, a media aide to Governor Babajide Sanwo-Olu, explained the government sold vehicles impounded for various traffic offences was because offenders failed to show up for the court process.

The auctioning has since generated a lot of mixed reactions on social media. While some social media users backed the government’s action, others described it as “harsh.”

Read Also: Lagos auctions 134 abandoned/forfeited vehicles
2. Obey traffic rules and regulations — When driving your car, be sure to follow all traffic laws. All traffic safety standards were created with the safety of everyone on the road in mind, including pedestrians. Make sure the vehicles are kept at a safe distance from one another.

3. Follow the road signs: Whether it is a stop sign, a speed limit, or a construction sign it is always imperative that you are observing and following these instructions. They are placed there for the safety of the vehicles on the road.

5. Motorists should not drink while driving — Whether it is “just a sip of alcoholic drink” or you’ve had any other substance that impairs your driving ability, it’s not safe to drive.

6. Motorists should not receive or make calls while driving.

9. Avoid indiscriminate parking, dropping off or stopping to pick passengers on the highway.

The tips to follow when driving are inexhaustible but traffic offenders should bear in mind that some offences carry various fines, imprisonment and training at Driving Institute, there are other major offences that provide for the seizure of the cars, trucks, motorcycles of traffic offenders.

Some offences which may lead to forfeiture of vehicles by offenders are: violation of routes by commercial vehicles, disobeying traffic control personnel, or neglecting traffic directions.

Always remember that ignorance of the law is not an excuse.